Gacha Club
Facebook
Twitter
Google+
Pinterest
WhatsApp
Your personal rank and your Brawlers’ rank is separate. Personal Rank is your XP gained from all events. Brawlers’ rank, on the other hand, depends on the number of trophies they each have. 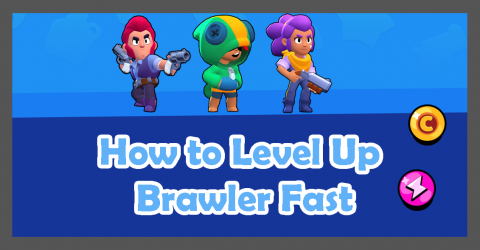 How to Level and Rank-Up Fast

How to Level Up Fast

Unlocking the fourth event is the best way to level-up fast. It gives double XP for every win, losses included. This event opens every four days. You also have to have a total of eight different Brawlers for you to unlock it. One of the perks you’ll receive once you level-up are the exclusive profile icons.
These icons can be unlocked once you’ve reached Level 40, Level 60, Level 80, Level 100, and Level 120. The trophy icons are yours after reaching a certain number of trophies. Aside from the icons, there are no other perks. Well, I guess you can count the 20 Gold you’ll receive per level-up and some bragging rights. ?

Aside from giving you a good practice match, these Bots give out XP too! For every win and losses, you will gain XP and Coins available. If you don’t want to play with random Brawl Stars players, you can play with these Bots without the worry of losing your trophies.

If you play too much, you will max the daily XP allowed per event. In this case, I was playing too much Showdown that the game doesn’t give me XP anymore. You can still gain trophies but no more chances of leveling up.

How to Rank-Up Fast

This is the fastest way to earn trophies! New Brawlers don’t lose trophies too. If they do, they only lose around 1 trophy for each loss. Make sure to test them out with Bots to get a feel of their gameplay. I usually go straight to Showdown. This is a great way to earn trophies and rank fast. With a win, your new Brawler can earn you 9 Trophies. Even if you get a low ranking during Showdown events, it can still give you at least 1 trophy. If you test your new Brawler in team events like Heist, Smash & Grab, and Bounty he/she will earn at least 5 Trophies per win.

2. Join or Create a Room

If Showdown is not your style, team-up with friends during team events. I highly recommend Brawling with a balanced team. You don’t want to have a team of all ranged Brawlers such as Brock, Ricochet, and Bo. Mix it up and think of a good combination of units. By teaming up, you can talk about strategy while inside the lobby. You can also use a VoIP app while playing. This can help the team strategize in real-time!

Showdown is the place to be for some heavy grinding! The trick in Showdown is to get as many power-ups as you can. If you see another Brawler, you can either choose between fight or flee. This totally depends on what Brawler you’re using. Using Shelly, Bull, and El Primo are our top choices in Showdown.

The most fun Brawlers I’ve used so far are Dynamike, Barley, and Mortis as players usually dodge them (for Mortis, he can easily evade other Brawlers). The hardest Brawlers to use are: Ricochet, his HP is still too low even after a couple of power-up; Bo, his ATK, Eagle-eyed, only deals 100 DMG per arrow. This is still too low even after using power-ups; Brock, he charges his missiles too slow. He can only shoot at a straight line too.

4. Pick your Event and Brawler Wisely

Brawlers have their own strengths and weaknesses. Some of them shine on a specific event and others don’t. On the image above, you’ll see Dynamike in a Heist event. Dynamike and Barley are the top choices in Heist. Along with Bull, Brock, and Colt to deal with damage to the safe. On Smash & Grab events, Mortis is the King. He can easily snatch those Gems and get off the dangerous mid area without a sweat. Piper is such a queen in Bounty. She deals with those extra damages if you’re at the tail of her range. She can easily snipe out Brawlers and add those stars to her collection.